It’s a raining, dreary, gray Sunday here.  There will be a bit of cleaning as soon as I have had a sufficient intake of coffee. 🙂

I made some progress on the Clapo-Ktus Shawl (free pattern).  I finished the first cake gradient and am ready to start the second one sitting in the photo.  So half the shawl is finished and now I’ll start the decrease side of the shawl.  There will be a definite line color change right down the middle of the shawl because I’m just using a similar gradient cake but since it’s down the very center I think it will look fine.  On the decrease side you start dropping the purl rows so they unravel all the way along so looking forward to seeing those. 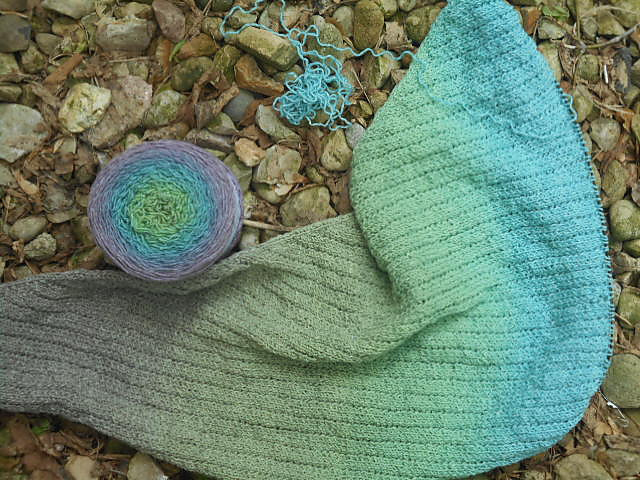 The June Camp Loopy challenges have been announced. It’s Science Camp this year.  I’m going to be knitting my project from stash and have changed my mind several times already on what yarn I want to use.  Now I think I’m going to change the pattern from the shawl I had planned to make to a little girl’s sweater.   Stay tuned…. there’s still a lot of days left until the June 1 start to change my mind yet again.

This was the cowl that I started for a ESK KAL.  It didn’t get finished by the end of first quarter as I had intended due to that arm incident but I finished it a few days ago finally finishing the seaming.

It will be great when those frigid winter winds blow.  It’s knit as a tube so double thickness to block the wind and I made it wide enough that I can pull it up on my head like a hood and it will still be tucked into my coat collar keeping the back of my neck warm.  It’s definitely a heavy cowl but some days you just need a wind stopper. 🙂

Each summer (June thru August) The Loopy Ewe has virtual knitting “Camp.”  It’s always fun.  This year, with so many people sheltering in place, there was a “Ramp Up to Camp” project for May.   It used themes from three past years of camps and the project specifications for all three projects for each of those camps.  You could choose what project/camp you wanted to do and use stash or buy new yarn.  Low key, something fun to knit and chat with on Ravelry for the month of May.

I was just looking back and Cowboy Camp was held in 2018.

This was the first quilt I made for that Camp.

So for Ramp UP To Camp  I chose the option which included “use a favorite yarn” and chose some from  the stash that I had been holding for just the right project.

It’s Dream in Color Cosette which was sold as a mini skein set called Love is Love purchased back in August 2016.  I had used a couple colors from the mini set previously.

The dark purple at both ends of the cowl are a different yarn I had in the stash – Malabrigo Rios in Purpuras.   This cowl turned out so squishy and warm.  It still needs blocking and some ends buried but the knitting is finished.

It’s such a gray and gloomy day – which squelched my plans for taking out garbage, getting the mail and maybe going for a walk to get some fresh air since first it was raining, then it turned to snow, now back to rain – and it’s cold!   I’ll save that walk to the other end of the apt complex to get the mail for tomorrow – so I’ve been rather lazy today but did just talk a great smelling and great looking quiche out of the oven for dinner later.  It has asparagus, ham, onions, mushrooms and cheddar in it and I will be making some Red Lobster knockoff garlic-cheesy biscuits to go with it and some fruit salad.  Yum, almost sounds like a real meal which I haven’t made many of lately.  Now I’m just debating if I  mix up that coconut pudding to make a quick dessert or save it for another day.

Is this not the perfect wrap for a Quilter?  I came across this pattern the other day and couldn’t get it out of my mind.   It is made/assembled in sort of an interesting way and between the beads for a bit of bling and the intarsia, it will be an interesting project.  Everything has been ordered and I just need to wait until I see the yarn in person as to which color will be my second “main” color.  The Midnight Blue will be the “background.”  I’m leaning towards the Poppy for the second main color (in place of the green in the pattern cover picture) but might also use the green.  I couldn’t decide if I wanted the beads to match the yarn, contrast, etc. so got some of each color.

The blog has been neglected but with working remotely, having one computer active is enough and I’m mostly too lazy to grab my own personal laptop so I can upload photos to the blog.   But I’m still here and the broke arm is progressing with healing.

Next weekend I should have a finished knit project or two to show you.  The most exciting thing this week – with three days of gloom and rain, the temps warmed up and the trees have leaves sprouting on them!!!!  And the grass was mowed for the first time at the apt. complex.  A sure sign that winter is over and spring is officially here, right!?